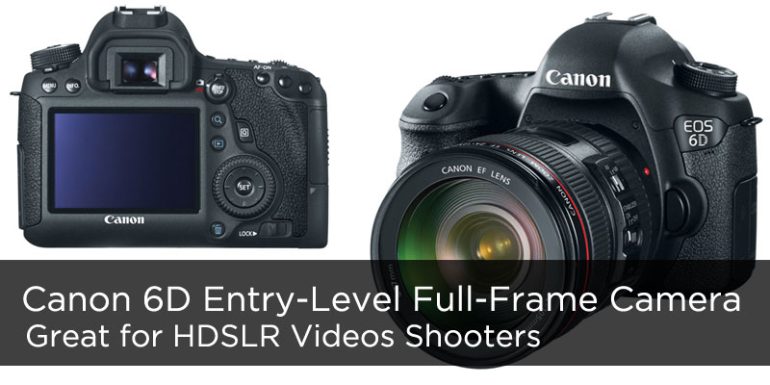 Canon does it once again. With the recent release of Nikon’s D600, a Prosumer full-frame DSLR for around $2300 for the body, Canon releases their own version of an entry-level full-frame DSLR camera, and it packs all the tools a DSLR filmmaker will need.

Most interesting to me is the HD video capabilities of the new 6D which are identical to the shooting modes found in the new 5D Mark III.

The LCD screen of the 6D is a 3″ screen with an aspect ratio of 3:2, but it does not articulate like that on the T3i and T4i which does help when shooting video at low angles.

One of the most unique features of the 6D has to be the built-in Wi-Fi and GPS capabilities to allow you to instantly share photos and videos and geo-tag your images. Canon will soon release a remote app for iOS and Android to allow you to remotely control your 6D without being tethered by a cable shutter-release.

For all you HDSLR video shooters out there, check out this test video shot with the new 6D, and be sure to watch until the end where you get behind the scenes footage, where they reveal the lenses and settings used for the shots they took.